Posted by Untold PHilippines on September 19, 2019 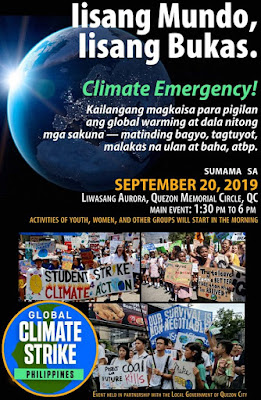 IISANG MUNDO, IISANG BUKAS
Mobilize urgently for our survival and our future!
Join Global Mobilizations for the Climate Emergency!

Millions of people around the world will join mobilizations on September 20 to 27 in response to the climate emergency.

The week-long mobilizations are inspired by the School Strikes for Climate that started in Europe and have spread to other countries – with hundreds of thousands of young people walking out of their classrooms to call attention to the climate emergency and demand actions from those responsible.


Climate change is one of the greatest challenges humanity is facing today. Climate change is a consequence of the unnatural warming of the surface of our planet since the start of industrialization. The warming is being caused by the dominant energy and economic systems that are resulting in excessive concentrations of greenhouse gases in the earth’s atmosphere. This warming is causing the destabilization of the earth’s climate systems.

Filipinos know first-hand the destructive impacts of climate change – from our experiences with super-typhoons, rising sea levels, unprecedented droughts, scarcity of freshwater. The super-typhoons alone have caused thousands of deaths, the loss of homes and livelihoods of hundreds of thousands of families, the dislocation of millions of people, the devastation of thousands of hectares of agricultural lands that will take years to recover.

Climate change has already reached the level of a planet-wide emergency - with devastating consequences for people and all living things. And it is quickly becoming much worse.

We have only a small window of time to prevent the situation from reaching greater catastrophic levels, and this window is closing rapidly. Thus far, government pledges, policies and actions are very short of what is required, and most corporations are refusing to stop their massive pollution of the atmosphere with their greenhouse gas emissions and the damage they are causing to the environment and the earth’s natural carbon sinks.

Our hope lies in citizens’ actions.

We must mobilize urgently to compel governments and corporations to act with the scale and speed immediately needed to:

1. Stop the expansion of coal and fossil fuel energy and make a swift and just transition to clean and renewable energy systems for people and communities

2. Stop the destruction of the environment and natural capacity of the planet to absorb greenhouse gas emissions; Undertake massive ecological restoration

3. Address poverty, inequalities and marginalization that increase vulnerability and risks of people and communities to climate change impacts;

4. Empower and build resilience and capacity of communities and families to deal with the consequences of climate change;

5. Respect the human rights of environment and climate justice advocates.

6. Mobilize the finance necessary for the above; Governments of rich, industrialized countries, in particular, should deliver on their obligations to provide climate finance

Beyond these, we must bring about the profound and rapid transformation of socio-economic and political systems to address the root causes of global warming and climate change. 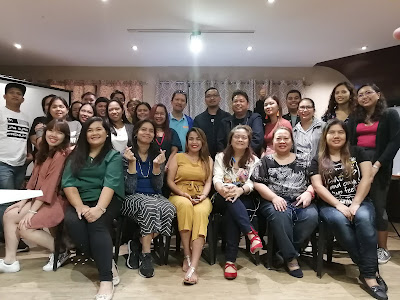 Now more than ever is the time to join hands, and bring together our collective strength, wisdom and power as Filipinos and join with people all over the world.
Climate Emergency Global Climate Strike Green Thumb Coalition Untold PH Untold PHilippines